I have a friend who recently started learning jui jitsu and he hasn’t been doing it for that long at all.

He’s a white belt and suddenly he’s trying to act like the big man on campus around all of my friends.

Openly talking shit to all of us saying he could beat our asses. Stuff like that.

We’re all fans of UFC and fighting in general but ever since he started rolling, he tells us we’re unfit to give our opinions and overall just acting like an ass with a massive ego suddenly.

He’s 5’8 140lbs, with absolutely no fighting/wrestling experience prior to randomly joining a gym.

Am I wrong to think this guy is acting high and mighty?

Ego and the Martial Arts

Sounds like someone has been watching a lot of Cobra Kai. 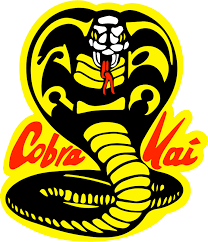 I don’t care what the belt color is. A person with humility wouldn’t behave like that.

And this isn’t an isolated case.

It is normal to have an ego and to flex it with your friends. The talk gets big and….that’s about it.

Typically this would have already resulted in some kind of match to see what kind of skills he has in an attempt to “put up or shut up”.

Either his friends are not interested, believe him, or are scared to find out.

Johnny Lawrence would call this a “pussy”. 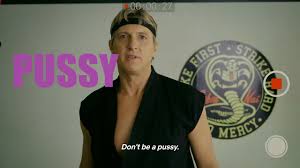 One of the greatest things martial arts can provide you or anyone is a value system to live your life.

People without values run their mouth, get into trouble, lack a central focus, and have trouble setting and achieving goals.

In the martial arts, being humbled is almost always part of the journey if you train long enough. Especially in the tried and true, combat-tested arts like Jiujitsu, wrestling, and boxing.

A lot of your values from martial arts will come from your training environment.

The gym and your instructors set that “tone at the top”. If you stick with it long enough, you should be absorbing this….as long as it’s being a consistent part of the training environment.

So what is his skill level now?

He likely knows very little other than knowing a few techniques that he would likely incorrectly execute without any knowledge of how to set them up.

The best thing he can do is keep training and allow humility to smash his ego.

His ego needs to be flattened. Then rebuilt. It’s the best way to become really good at anything.

The “white belt mentality” so often thought of is best when you really know you’re a beginner and you allow yourself to learn.

GET 100 GRAPPLING & STRENGTH BASED WORKOUTS!